You are here: Home / Contest Prep / Tips on Bodybuilding Poses 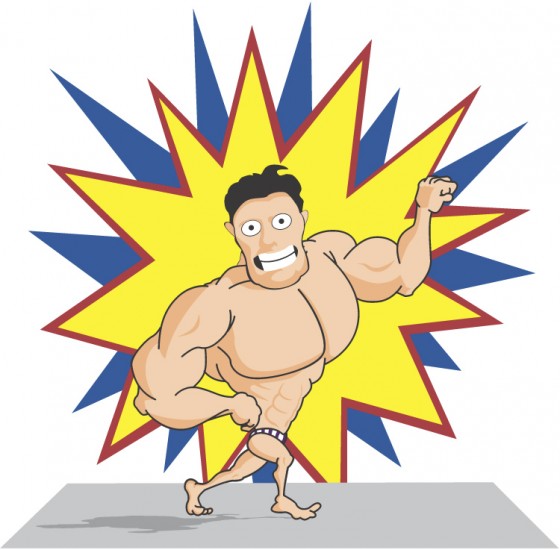 Excellence In Execution: Perfecting The Pose

In bodybuilding competition, posing ability can often be the difference between winning or losing a closely fought battle. Nothing looks worse than someone with a great physique with an inability to show it to full advantage due to inferior posing skills.

Many a bodybuilder has lost because they had not been able to show their muscles effectively. Judges can only judge what they can see and if one, due to deficiencies in posing, is hiding certain aspects of a particular muscle group, or worse, distorting their previously flawless physique into something grotesque, they may be overlooked in favor of one who is able to convey a winning physique, and attitude.

Posing is not something that should just be practiced in the remaining weeks leading up to a show. Indeed, it has a year-round application. In addition to enhancing ones ability to impress the judges, posing between sets has been shown to be an effective way to speed muscle growth.

Hard posing following fascial stretching (stretching the protective sheath that envelopes the muscle to allow more room for the muscle to grow) will accentuate muscle hardness and separation. This can be done during a workout, between sets, and will provide further opportunity to perfect posing presentation.

In bodybuilding, there are eight mandatory poses:

A pose which is either optional or mandatory depending or the federation one belongs to is the most muscular. During any bodybuilding show, in the pre-judging portion, the bodybuilder will be called upon to complete the mandatory poses, often several times he or she is called back out and compared with their fellow competitors.

It is at this stage the judges will get their initial glimpse. Following the mandatories is the free posing pound where all seven compulsory poses can be incorporated into a choreographed 60-second routine. Once again, points are given here for excellence in posing ability. To excel in bodybuilding, posing should be given full attention.

The quarter turns are the first series of poses a competitor will be asked to complete. They provide a good indication of overall muscle symmetry.

To begin the quarter turns, stand in a semi relaxed position. Arms should hang to the sides, with weight distributed evenly. Widen the shoulders, flare the lats and flex the thighs and abs to enhance muscularity.

The quarter turn to the right to show the left side of body comes next. As with the front semi relaxed pose, one should stand straight with feet flat on the ground. Face ahead and tense shoulders, thighs and abs slightly. Technically, when standing to the side one should not twist their body around to emphasize any aspect of the upper physique. This, however, is done quite often.

Another quarter turn to the right to display the rear musculature of the upper and lower body. Again, stand straight and widen shoulders. It is also a good idea at this point to flex the calves for maximum effect.

As with the previous quarter turns, the competitor should, when quarter turning for a third time, stand straight and look ahead this time to expose the right side of the body. Finally, quarter turn to the right and stand in the semi relaxed front pose.

In order to convey biceps size and lat width, it is important that the competitor lift their elbows higher than their shoulders with this pose. The key thing to remember is to keep the shoulders down and elbows up so that lat development can be emphasised.

It is also important to pull the arms back slightly to highlight the delineation between the biceps and triceps. Bend the legs, at the knees, slightly to accentuate the quads. Remember to keep everything flexed. The best practitioners of this pose are Dexter Jackson and Lee Priest.

With this pose try to keep the back leg, which extends behind, angled out so as to convey the illusion of great width in the lower body. Flex the calves and hamstrings for full effect. As with the front double biceps, keep the elbows higher than the shoulders and spread the lats.

Do not push the backside out, keep it tucked in and tightened. Also tighten the lower back to highlight the erector muscles. With both the front and back double biceps, keep the thumbs tucked in as this looks more professional.

Keep heels together with toes pointed out at a 45-degree angle. This positioning accentuates the outer thigh sweep.

Place hands on waist to decrease its width and flare out the lats to make them visible from the front. Keep the shoulders flexed and up.

Legs should be positioned as in the rear double bicep pose. Push waist in with hands and flare lats out (this pose should also show the shoulder to hip body taper).

Place hands to the front of body while keeping shoulders up and straight. Never hunch over as this can obviate much of the upper lat musculature.

Stand to the side and press the front thigh and calve hard against the rear leg. Keep abs tight and pulled in.

Keep arm to be displayed straight and grasp the wrist of this hand with the opposite hand – to hold it in place. Press arm against torso to create an illusion of thickness. Jay Cutler performs this pose magnificently.

Position legs as you would with the side triceps pose. Take a deep breath and lift chest up and out. Grasp arm to be displayed with opposite hand. Bend arm to flex bicep.

Avoid lifting the rear shoulder up as this will reduce chest thickness. Instead, keep this shoulder down and bring arm across slightly to highlight the striations in the opposite pectoral.

A picture of Arnold demonstrating this pose shows exactly how elevated the chest needs to be to create an impression.

With this pose, try to emphasize lat width and, of course, ab and thigh development. Begin by placing one leg out and flexing the thigh and calve. Place hands behind neck and bring shoulders down.

Flare lats while keeping elbows up and back. Vacuum the abs in and crunch down on the frontal rib cage, abdominal wall, intercostals, serratus anterior, and obliques while exhaling.

9: Most Muscular (Optional Or Compulsory)

As the name suggests, the most muscular pose should display maximum amounts of muscle to overwhelm the judges. All frontal muscles will be displayed as the competitor crunches each hand together, while contracting the chest, biceps and shoulders. Thighs and calves should also be flexed.

There are many variations on this standard most muscular: stand with palms on hips and push down, place one palm on hips and the other in front of the body or place both hands behind the back and pull arms forward.

The fr3e-posing round includes a posing display designed by the competitor to music of their choice. The idea with free-posing is to choose music and emphasize poses that will complement ones physique and natural stage presence. If one is known for overall massive muscle development, “power poses” like the most muscular might be emphasized.

Music could range from the loud thrashing strains of ACDC to upbeat techno. Smaller competitors, who perhaps are blessed with greater symmetry, could use softer music; classical or easy listening for example. A free-posing routine should include all of the compulsories, or variations of, and incorporate many optional poses such as the intercostal twitch crunch, hamstring flex or the javelin-thrower (one of Arnold’s favorites).

Also, it is important to try to develop something unique that will capture the judges’ eye. Many bodybuilders are known by certain signature poses: Samir Bannout with his arms and hands outstretched springs to mind. With free-posing it is also wise to perfect the transitions between each pose as a deficiency in this area will give the appearance of a sloppy routine.

Transitions are essentially all movements between any given pose and will need to be factored into the pre-judging compulsories also. Analyse the posing routines of Shawn Ray or Lee Labrada for examples of perfect transitions.

Posing For Muscle Growth & Self Assesment

Posing between sets can have a profound effect on muscle hardness and detail. In fact, entire workouts can be based around the concept of ISO-tension, where the muscle is tensed and held for a count of ten. Flexing works in much the same way, but for bodybuilding purposes the emphasis should be pose perfecting and muscle chiselling as a pre-contest strategy.

Posing in the gym also helps to one pre-asses their physique to observe any weak points, which can be addressed before stepping on stage. The great Arnold said it best:

“You can’t practice posing too much. I always believed in flexing and posing whatever body parts I was training during any workout in the gym. If I trained arms, I would stop between sets and do some arm shots, studying myself in the mirror. Training legs or anything else, I would always take time to pose.”
Posing this way is not vanity. It has two specific advantages. On the one hand, this constant flexing in its self is a good form of training, helping to make the muscles hard and well defined. On the other, it constantly shows you exactly how much development you have achieved or failed to achieve.

As great as your physique may appear at rest, it will primarily be judged as seen in poses. Therefore, what it looks like when you pose is the ultimate measure of your success.

That is why I always assessed my physique by seeing what I looked like posing. Did I need more cuts in the upper back? Was I getting the right tie-in between pecks and delts? There is no way to tell without examining the body in each of these important poses, and that’s why I felt I could never pose enough”.

To present oneself onstage in the best possible light, it is not only important to have a well conditioned physique. One must also present this physique to the best of their ability. Perfecting the various mandatory poses as well as the optional ones will highlight hard-won musculature and add an element of class to anyone’s contest showing.

Posing in the gym will also enhance ones competitive chances. In addition to improving the ability to perform each pose, between sets posing will help to harden and chisel the muscles. Weak-point observation can also be done by posing constantly. Remember, the best physique in the show may fail to win if posing is substandard.