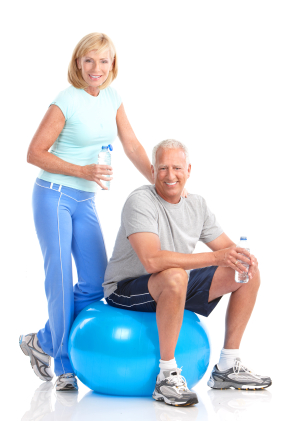 So what’s the deal with swiss ball training?

Go into just about any gym in the United States, and you will more than likely see them; big, beachball-looking objects, usually scattered around the area set aside for stretching and abdominal training. These new invaders into the gym scene have actually been around for many years in therapy settings.

Commonly known as “swiss balls” after their place of origin, few pieces of training equipment have seen the almost overnight widespread popularity that these apparatus have. However, there is an alarming new trend that is also making it’s way around gyms everywhere, and that is the over-use of swiss ball exercises by a lot of trainers and their clients.

Before we get much further, let me first say that I own and use a swiss ball for myself, and the training of my clients. In some cases, like when I have to travel to a client’s house, the swiss ball will play a major role in training. They are an excellent way to train the core musculature – i.e. your abs and lower back, or your stabilizer muscles – along with adding variety and fun to the workout.

But these reasons are no excuse for those of you with gym access to spend the majority of your or your clients’ training time balancing on a ball. Like most new gimmicks to hit the fitness scene, exercisers everywhere have gone overboard with swiss balls, actually hindering their own training.

To illustrate my point, let me relay a scenario that I recently saw at a gym in which I train. While doing a squat workout (as Dr. Squat says, everyone MUST squat!) I noticed a young man instructing a young lady on how to do a lunge with one foot placed up on a swiss ball. Never mind the fact that the ball was way too big for her frame, that it was forcing her hips completely out of position, and that she could barely get 4 good inches of motion from the move – what got me was the question I kept asking myself – Why?

I had been watching her out of the corner of my eye since she and her trainer had come to the area of the gym with the power racks. She was not in bad shape, but she definitely was not a candidate for specialized work. Yet, she did not perform one set of deadlifts, squats or even leg press. Instead, all she did was those lunges with her foot up on the ball. For the amount of time and effort that she put in to complete the 5 sets of those lunges, she could have done 5 sets of squats or deadlifts and gotten a much larger return on her investment.

This is a key point that most swiss ball fanatics tend to overlook – yes, the swiss ball exercises are new and exciting, but what do you give up to do them? In this case, the trainer had his client give up squats or more conventional, intense leg training exercises in favor of some cute movement that he had read about in a muscle magazine. No doubt he impressed the client with his “expertise” in this new field of fitness, but he sold her results short doing it.

The problem as I see it is not the swiss balls, but the information that is being dispensed by the fitness media regarding them. They are looked upon by some as the Holy Grail of training, that one missing piece of the puzzle that will make all the difference in someone’s muscle-building and fat-loss endeavors.

Unfortunately, this is not the case. They are simply a tool to be used when the time is right. Yet no one seems to mention when exactly that time is. This has lead to a lot of confusion among exercisers as to how to successfully integrate the ball into their own training.

In the spirit of clearing up some of the confusion, here are some guidelines to go by when using swiss ball exercises;

While a variety of methods are encouraged, perhaps the one area in which a swiss ball can be used on a consistent basis is abdominal training. Swiss balls allow a full range of motion; the exerciser can easily roll forward during crunches to take any strain off the lower back, and they allow for numerous variations of abdominal exercises. A routine of weighted crunches (crunches with a plate held across the chest for resistance), reverse crunches and russian twists performed on the ball will lead to an impressively chiseled and strong midsection.

If you are going to do swiss ball work for any other muscle group, do it AFTER your main exercises. The prevailing line of reasoning says to do them first, in order to exhaust the stabilizers and target the prime movers more efficiently. I disagree for that very reason. Why would you want to attempt a 5-rep squat after exhausting your stabilizers? This is just begging for trouble. Exhaust the prime movers first with high intensity work – the kind you get from the core lifts of squat, deadlifts, bench press and barbell rows – and then hit the stabilizers. Since the prime movers are fatigued, the stabilizers will be forced to work even harder, effectively targeting them in a more efficient manner, while not detracting from the intensity or safety of your core lifts.

Limit your swiss ball work to no more than 2 – 3 sets per muscle group being exercised. Now, read that again. That does not mean 2 – 3 sets per exercise, but 2 – 3 sets per muscle group, total. If that means one set each of 2- 3 different exercises or 2 – 3 sets of one exercise, do not overdo the swiss ball work. If you have that much energy left you would get better returns on your investment by doing another set of a basic lift for that muscle group. Stabilizers are usually smaller muscles that do not need to be targeted with countless sets in order to train. Remember; they have already been working to stabilize your core lifts.

Run from anyone who tells you that you should be able to stand on the ball and perform a squat on it. While it’s a neat trick, last time I checked no surface on this planet is that unstable, making the time and effort necessary to achieve this trick a literal waste of time. If you want to learn how to do this in order to impress your workout partner then that’s your business, but any trainer or “expert” that suggests that this is a skill you must possess is not living in reality.
Conclusion

So there you have it, four guidelines to go by when trying to integrate the swiss ball into a scientifically-based training program. Remember that Arnold never used a swiss ball in his training, yet developed one of the most admired physiques of all time.

In addition, ISSA co-founder Fred Hatfield never touched a swiss ball on his way to becoming the first man to squat over 1000 pounds in competition. In other words, while the swiss ball is a great tool to put in your bag of tricks, it can never replace good old hard work and moving a mountain of iron. Stick with the basics, and you will garner far better results for your efforts.