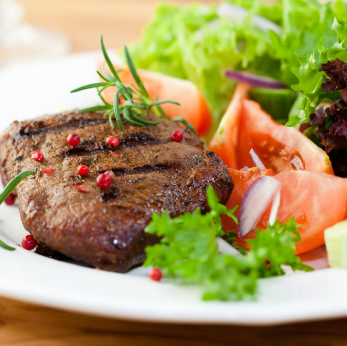 Don’t rub your eyes, do not pinch your cheek; yes you’re awake, this is not a dream. While everything you may know up until this point has led you to believe you must eat less to lose weight, I’m here to question that theory-to an extent.

I’m not saying you can eat more food than your body can use and successfully lose fat, but I am saying that eating more frequently may help you break through a weight loss plateau. Hibernation season is over; it’s time to get in beach body condition.

Weight loss is nothing more than a simple calculation; one that must tip the scale (no pun intended) in your favor. Very simply, if you consume less calories than your body needs, you will lose weight.

Unfortunately, in this case, too much of the weight lost will be lean body mass; not something fitness enthusiasts are after. In addition to simply reducing your calories through diet and exercise, the way those calories are divided throughout the day is important as well.

Believe it or not, while most bodybuilders and fitness enthusiasts have been eating in this manner for a long time, this style of eating has not been extensively researched by scientists.

Although there is some science to support the benefits of meal frequency and meal patterns, more is clearly warranted. Let’s take a look at what’s available and extrapolate the findings to find what pertains to you and your clients.

The Importance Of Breakfast

Let’s first start with breakfast. Breakfast was given its name because you are “breaking the fast” from the last 8 or so hours you have been sleeping. This is the reason it’s often said that breakfast is the most important meal of the day.

Your metabolism slows down when you don’t eat and more than several studies have shown a correlation between breakfast consumption and greater weight loss success.1, 2

Your body tries to do all it can to conserve your hard earned lean body mass (the first to go) when you’re essentially in a starvation mode, which is what can happen during sleep. Subsequently, eating that first meal is crucial.

Furthermore, after you eat your metabolism increases due to something called the thermic effect of food. While each macronutrient has different effect on thermogenesis (increasing heat to burn calories), for the purposes of this article, it’s important to understand that all foods increase metabolism, plain and simple.

In addition, it isn’t wise to leave too long of a gap between feedings either. Otherwise, you’ll essentially be preventing your body from going into “preservation mode” like what happens during sleep. Now of course this doesn’t mean you should force feed your body until you reach gluttony with the intention of preserving lean body mass or increasing thermogenesis.

To support this notion, a study published over 20 years ago measured weight loss and resting metabolic rate in 38 obese patients.3 Subjects were fed 800 calories/day (known as a very low calorie diet or, VLCD).

While that may seem confusing, remember that subjects in every group received the same total number of calories divided up differently throughout the day (i.e., one, three or five meals). In addition, there was a slight difference in the total amount of protein in each diet. Now that we have that straightened out, let’s take a look at the results.

Not surprisingly, when protein levels were held constant at 13% of total calories, nitrogen losses were significant (i.e., it wasn’t enough protein to meet the needs of the individual).

In addition, it was determined that those who had a higher percentage of their diet coming from protein (15%) and were fed more frequent meals (5/day) had a better preservation of lean body mass.

Another study published more recently assessed energy deficits (i.e., taking in less calories than your body needs) and body composition in elite female gymnasts and runners.4 The researchers collected dietary and activity data from these elite athletes to determine a typical day in terms of energy intake and expenditure.

The results from this well-designed study suggest that energy deficits (measured by frequency and/or magnitude of deficit) are associated with higher body fat percentage in these athletes.

In fact, the number of daily energy deficits greater than 300 calories throughout a 24-hour period correlated to higher body fat percentages in the athletes tested.

To summarize, eating more frequently (nibbling all day vs. gorging) is something many of you have probably read about and hopefully practice. While there is a paucity of research in this area, the few studies that are out there favor smaller, more consistent meal consumption.

This is of particular importance for athletes or even just the general fitness buff who hopes to preserve as much lean body mass as possible while attempting to lose fat. Products like meal replacement powders, blended with a bit of fruit, would make a nutrient dense, low fat meal and would fit this new eating style recommended.