You are here: Home / Muscle Building / Tips to Gain More Muscle By Changing Your Rep Tempo 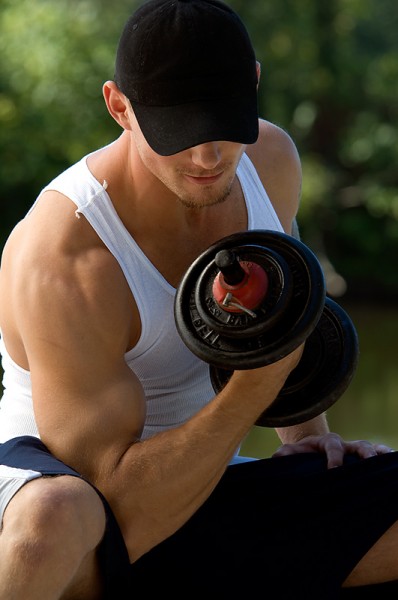 Can you gain more muscle by changing your rep tempo? There are a million ways to train, and a million ways to alter your training. Many people become overwhelmed when presented with the myriad of “systems” that claim to be better than the rest. In reality, my experience is that the most successful program is the one you haven’t tried yet! One great way to add variety to your training is to understand and use the concept of tempo.

Tempo as a concept has been around since the inception of bodybuilding. Some athletes like to explode the weight upwards at blinding speeds and drop them just as fast. Other athletes insist that they do slow, controlled movements. Many successful bodybuilders vary their tempo throughout the training cycle.

Ian King, an Australian strength coach, did not invent tempo, but he popularized the system of writing tempo. Charles Poliquin, a Canadian strength coach, is also credited with bringing this concept to mainstream. Tempo simply refers to the rate at which you move the weights. If you are not paying attention to tempo when you train, you may be missing out! Tempo is written with 3 and possibly 4 numbers.

The Second Number:
The second number is the pause after the first phase is complete – for example, in the bench press, a pause as the weight is held stationary just above the chest.

The Third Number:
The third number refers to the concentric or positive phase – the contraction. For a bench press, this would be driving the bar upwards. A number of 1 here typically means, “explode” – in other words, you may do it faster than 1 second.

The Fourth Number:
The fourth number is usually left out, but if present, refers to the pause at the top of the movement.

In our example of 1234, you would do this on a bench press:
• Take 1 second to lower the bar to your chest
• Pause for 2 seconds with the bar held just above your chest
• Take 3 seconds to drive the bar upwards, controlling it and even moving more slowly than usual to take the full 3 seconds
• Pause for 4 seconds at the top, with your arms just shy of lockout
That would be one rep, and that rep would have taken 10 seconds. If your training program called for 3 sets of 12 reps, that would mean you would spend 3 x 12 x 10 = 360 seconds or 6 minutes moving weight. Add to that your rest time, and you can estimate the length of your workouts!

What Can Tempo Do For You?

Now let’s explore what tempo can do for us! Tempo affects many variables of training. The first, and possibly the most significant, is time under tension. Tension is what forces the muscle to contract and perform work. It is tension that fatigues the muscle and tension that triggers the response to training – a combination of strength (neural) adaptation, and/or mass (hypertrophy). So tension is a key factor to manipulate, and one of the ways to manipulate time under tension is tempo.

One popular diet book recommends shouting one phrase as you lift the weight, and another as you lower the weight. This enforces a specific tempo – probably something like 301 – 3 seconds to lower the weight, no pause, explode up. This is important. A pyramid of reps for this example training-program contains 60 reps, so each muscle spends 240 seconds or about 4 minutes under tension. Let’s say you were training 3 sets of 12 reps at the same tempo. This would translate to 36 x 4 = 144 seconds under tension, or about 2 ? minutes. This would be almost half the tension that the pyramid exercise provides. Is this bad? Not necessarily – it depends on the workload. If you were lifting a heavier weight, then the tension would be less but the workload may be comparable or even greater. As you can see, there are many factors to consider.

Tempo explains why doing the traditional 3 sets of 12 can fatigue the muscle as much as doing a “super heavy” lift with 2 sets of 4. If I do 3 sets of 12 at a certain weight, most likely I can handle a 211 tempo – 4 seconds per rep, so we are talking 2 ? minutes under tension. When I go extremely heavy, for 2 sets of 4, I still control the bar down – 2 seconds, but I try to explode up immediately. It can take me a full 4 seconds to complete the rep and push the bar up, because the weight is so heavy (high intensity)! So now I’m taking a 204 tempo, or 6 seconds per rep. 2 x 4 = 8 x 6 = 48 seconds under tension. Even though I perform ? of the reps, I’m only at about 1/3 of the time under tension – and at a much heavier weight.

Tempo doesn’t just affect time under tension. You can manipulate tempo for other reasons as well. For example, it is well known that the negative or lowering phase of a lift causes the most micro trauma/damage to your muscle tissue. While doing this constantly would result in overtraining, performing slow negatives for a few training sessions in a cycle may be extremely beneficial for muscle growth. So every 3 or 4 training sessions, you might change to a 422 tempo – or, if you are very bold, a 613 tempo! 6 seconds to lower you on a wide-grip pull-up or weighted dip is a great way to load those muscles with tension and elicit some major growth!

Some people have weak areas such as at the bottom or top of a lift. If your bench press fails at the bottom rather than the top, you might consider a 231 tempo – take 2 seconds to lower the bar, and then pause for 3 seconds and explode up. The pause on the bottom forces you to perform an isometric contraction – your muscle contracts, but the resistance is not moved. This will strengthen you in that specific range of motion and help get past the “sticking point.”

I like to use tempo in my fat-loss programs because of the way it targets muscle fibers. Many of my clients are familiar with the sets that I prescribe where half of the set is performed explosively, and the second half extremely slow. I learned this technique from John Schaeffer, an ISSA instructor. The initial portion of the lift forces a neural or strength adaptation because the movement is explosive and requires a coordinated effort with all of the motor units within a particular muscle.

This fatigues the muscle, and then the slower reps kick in. These slower reps target individual motor units, and further fatigue the muscle and trigger a mass or hypertrophy response. Like any other training method, this is only effective for a short cycle before other techniques must be employed.

As you can see, tempo is a very powerful tool when designing training programs. Understanding tempo is easy, and incorporating it is not difficult. The next time you jump into the iron game, think about time under tension and tempo. If you dance to the tempo, I’m sure you’ll be satisfied with the results.