You are here: Home / Six Pack Abs / Ab Scissors! Does it work… 6 Popular Ab Machines Put To The Test 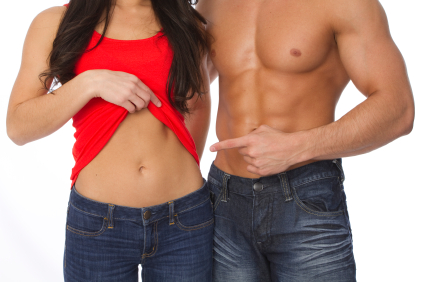 Promising a flatter stomach and smaller waistline, abdominal exercise machines form a big part of the multi-billion dollar home exercise industry. Do any of them work better than the traditional abdominal curl? A group of researchers from California decided to find out [1].

Forty-six volunteers (20 men and 26 women) took part in the study. After being told how to use each device, they performed one set of 8-10 repetitions for each exercise.

The researchers used electromyography (known simply as EMG) to measure recruitment of the abdominal muscles during each exercise. EMG activity was assessed for five consecutive repetitions in each set. Movement speed was controlled across devices and subjects. The machines with variable resistances were all tested at their highest resistance setting.

About Your Ab Muscles

* Rectus abdominis extends down the stomach from your ribs to your hips. When you lie down on your back and lift the shoulders from the floor, rectus abdominis is the muscle that’s doing most of the work. The six-pack look is the result of bands of connective tissue that “cut” into rectus abdominis. The more developed the rectus abdominis muscle, the deeper the grooves.
* The external and internal obliques run down the side of your waist. They actually “help” rectus abdominis during various curling exercises, and are also active during resisted twisting movements.
* Transverse abdominis acts a little like a corset, helping to hold your abdomen flat. You can’t actually see transverse abdominis, as it “hides” away underneath the other abdominal muscles.
* Psoas (the “p” is silent) is a muscle that crosses the spine and hip. The main role of psoas is to flex the hip. Stand up straight and raise one leg. It’s psoas that’s doing most of the work.

NOTE: Although this study measured muscle activity in the upper and lower abs, it’s debatable whether a distinct upper and lower rectus abdominis exists in most people [2].

What do all the numbers mean?

To assess the effectiveness of each device relative to the crunch, EMG values for the upper and lower rectus abdominis and the right external oblique were assigned a value of 100%.

“Contrary to many of the claims accompanying several of the devices tested,” write the researchers, “the Ab Scissor, Ab Swing and 6 Second Abs were significantly less effective than a crunch at eliciting upper and lower rectus abdominis activity.”

Except for two machines showing greater activity in the right external oblique, all the machines showed less EMG activity than the traditional crunch. This suggests that these machines were less effective than the crunch in recruiting these muscles.

The only machine that showed greater EMG activity than the traditional crunch was the Ab-ONE, a banded exercise device with a bar that’s held with an underhand grip, with your palms facing toward your face.

To perform a crunch with the Ab-ONE, you lie on your back on the floor in a position similar to a crunch. Your hips are flexed to a 45-degree angle and your knees are bent.

A pad is placed on your stomach at the level of your navel. You then perform a crunch-type movement while simultaneously pulling down toward the floor with your elbows.

So, is the Ab-ONE worth a try?

Personally, I don’t use or recommend any of these machines. I usually train my abs twice a week using a variety of exercises. In one workout, for example, I might do cable woodchops, hanging leg raises and standing cable crunches. In the next workout, I’ll use a few different exercises, such as barbell rollouts or ball reverse curls (for a sample ab workout, see, “Lift weights and lose fat: How to drop pounds by picking them up, Part II” in the Members-Only Area of my website).

Most people who buy these kinds of products want a smaller waist or a flatter stomach. This will require losing fat. The best way to do this is to combine regular exercise with a diet that contains the right number of calories, adequate amounts of protein, a healthy blend of fats, and carbohydrates with a low energy density.

And what if you want a six-pack?

Rectus abdominis, which is the six-pack muscle, extends down the stomach from your ribs to your hips. When you lie down on your back and lift the shoulders from the floor, rectus abdominis is the muscle that’s doing most of the work.

The six-pack look is the result of bands of connective tissue that “cut” into rectus abdominis. The more developed the rectus abdominis muscle, the deeper the grooves. To see your six-pack, you need a well-developed rectus abdominis combined with low levels of subcutaneous fat (fat stored under the skin).

The Ab-ONE may work rectus abdominis a little harder than a crunch done on the floor without any added resistance. But holding a dumbbell across your chest while doing a crunch will probably have a very similar effect. There are also several ways to make the crunch more effective, such as “bracing” the abdominals rather than pulling them in.

Although it came out top of the list, I’m not convinced that a 25-30% difference in muscle activity during five consecutive unweighted crunches means that the Ab-ONE is worth spending your money on.